The best performing Australian shares fund in 2017 was managed by Bennelong Australian Equity Partners, in a year where big gains were available to investors who put their money with the right manager.

Bennelong’s Concentrated Australian Equities fund generated a return of over 30 per cent before fees in 2017, Mercer’s widely followed investment survey showed. The fund was also ranked number one over three and five years, with annualised returns of 24 per cent and 22 per cent, respectively.

“We try to go for the reasonably predictable, low risk franchises that can build earnings and value over time,” BAEP investment director Julian Beaumont said. With only $300 million under management, this fund “is almost the best kept secret in the market,” Mr Beaumont said.

Mr Beaumont pointed to lucrative holdings in blood plasma giant CSL and skincare business BWX as drivers of the year’s gains. “The businesses we are buying are defensive and resilient; it’s medicine and medical services, wine, pizza, skincare, and gaming.”

Heading into 2018, the Bennelong fund has a “significant exposure to offshore-exposed names”, such as Treasury Wine Estates and plumbing parts manufacturer Reliance Worldwide, as well as CSL.

The fund’s underexposure to resources has been “rectified” in recent months, with BHP Billiton and Rio Tinto added. The portfolio has also participated in recent initial public offerings, taking a stake in Queensland building materials company Wagners.

Rounding out the top three funds were the Selector High Conviction Equity fund, with a return of 26 per cent, and the Platypus Australian Equities fund, which over the year generated above 24 per cent.

It was a rare good year for stock pickers, with the median actively managed fund over the 12 months beating the benchmark S&P/ASX 300 accumulation index (which includes the impact of dividends) by 13.8 per cent to 11.9 per cent.

The Mercer figures are quoted before management fees, which would typically subtract roughly 1 per cent from the stated figure. Similarly, an investor who wished to track the market through a listed passive fund would pay roughly 0.2 per cent in fees. 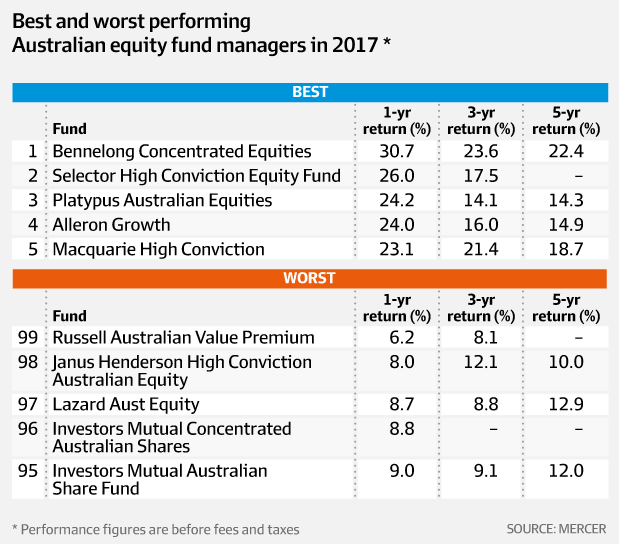 Some funds, such as the Bennelong fund, also charge an additional performance fee when the fund generates returns beyond a margin above the reference benchmark.

Among the top five best performing funds was the Alleron Growth High Conviction Equity fund, which generated performance of 24 per cent in 2017.

“We want to see evidence of significant change that is not encapsulated in the share price,” Alleron Investment Management senior portfolio manager Alan Kwan said.

“We are looking for growth, and most of the time that leads us to mid-cap names,” Mr Kwan said, referring to companies at the smaller end of the top 100 by market capitalisation.

Mr Kwan pointed to holdings in Treasury Wine Estates and hearing implant manufacturer Cochlear as examples of outperforming stocks in 2017. “There is still significant potential growth for Cochlear.”

“They recently announced they were setting up a facility in China – it looks like they have been invited in.”

It was a tough year for funds with little or no exposure to resources names, with the materials and energy sectors jumping by more than 20 per cent over the year.

After healthcare name CSL, BHP Billiton and Rio Tinto were the largest single contributor’s to the sharemarket’s gains in 2017, as they lifted 22 per cent and 33 per cent, respectively.

That led two funds managed by well-known house Investors Mutual to sink to be among the worst performers in 2017 as a result of generating reasonable 8 per cent returns, but shy of the benchmark’s 12 per cent and a fraction of the top performers.

Fortescue was a significant underperformer in the mining space in 2017, but Mr Kwan has kept the faith in what he believes is a high quality business.

“We think [the stock] is significantly undervalued relative to the likes of BHP and Rio Tinto.”